We’ve all learned that fresh-squeezed citrus is non-negotiable, it’s become dead easy to get good rums and syrups, and we’ve got great recipes. So why does that drink still not seem quite right? It may be that there’s just one final hurdle standing between you and a fantastic tropical cocktail, and it’s in the shaking step.

I encounter it often: a tropical drink that’s just a bit too heavy, a touch cloying. It’s probably short on two ingredients: water and air. Those two ingredients don’t stand out when you’re scanning the recipe, but they’re both important and worth some care.

Here’s the very short version of how to fix it: Use more ice; shake longer. Go heavy on both counts, it’s not time to be shy.

Let’s zip back in history for a moment, to when Donn Beach was first serving these drinks. Why, here’s a convenient picture! See that row of small appliances on the shelf in front of him, all the way to the right of the picture? Those are drink mixers, like you’d make milkshakes with. A lot of those old Don the Beachcomber recipes say to “blend for 5 seconds.” These aren’t blended drinks, in the slushy sense. I have one of these mixers from 1934, and it’s not powerful enough to break up the ice. What it’s really doing is shaking the bejeezus out of your drink, really quickly. It’s agitating all of that crushed ice and liquid, which melts some of that ice, introduces a fair amount of air (especially if the drink has pineapple juice in it), and gets the drink good and cold. The lower temperature, the dilution, the air: those three factors bring a lightness into the taste and feel of your drink.

So, you don’t have one of these mixers. I don’t either. I mean, I have that 1934 mixer, but I don’t trust it to not start a fire, frankly. You could buy a modern drink mixer, but most people just shake in tins. People can get really beautifully nerdy about their choice of shaking equipment and technique (and can get exquisitely nerdy about the science of what’s happening inside the tin), but all you need to know for now is that you’re gonna shake a lot.

First off: use crushed ice. I use a Waring Pro ice crusher, but a canvas bag (a.k.a. a “Lewis bag“) and a mallet will work fine, too. If you were to use full cubes, you would be working with less surface area on your ice: less melting, less cooling, and there would also be less agitation to bring in that air.

Shake, shake, shake. [Dated Taylor Swift reference or even more dated Outkast reference here.] You want to shake until you feel the outside of your tin getting cold. I don’t count or time my shakes, but you could experiment and come up with a time/number that works for you. I just shake until it feels a little silly that I’m still shaking, and then I shake a little more.

When you’re ready to pour the drink into the glass, go ahead and use the ice that’s in the shaker, no need to pour it over fresh crushed ice. If you have more ice in your tin than will fit in the glass, then stop pouring when the glass is nearly full, then use a Hawthorne strainer to get the last bit of liquid into the glass.

I can’t leave you looking at that awful picture of me shaking, so here’s a palate cleanser shaker shot. 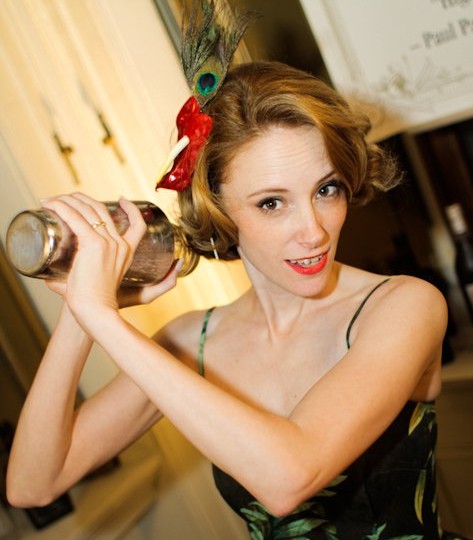 As I mentioned above, people can get beautifully nerdy about ice and shaking; I fully expect some of those voices to chime in with notes that contradict some of what I’ve laid out here, and that’s welcome. Listen to those voices, too, and experiment. Even if you don’t feel like these tips have made your drinks better, you’ll have fun drinking the failed experiments.

5 thoughts on “An Easy Fix for Your Tiki Drinks: Tweaking Your Shake”