Critiki member ronsteve has added a souvenir photo, and its folder, to the Critiki listing for Hawaii Kai in New York City. This photo was taken in August 1977, a summer that was particularly volatile in New York City. The whole country was suffering from an economic downturn, the first to come after many post-WWII boom years. There was a heat wave. There was a massive, city-wide outage just weeks earlier, in July, which led to widespread looting, vandalism and arson. Son of Sam, a brutal serial killer, had been on the loose and was dominating headlines; he was arrested on August 11.

These people in this photo, they are enjoying a tropical escape of the highest order. Well, maybe not quite the highest… these fine folks appear to be sticking to water. Can’t blame them for wanting to keep their wits about them.

I particularly love that the photo folder proudly states Hawaii Kai is “New York’s newest and most beautiful Polynesian restaurant,” a claim that would have been correct when the large bulk order of these folders was probably placed in the ’60s, but by the time of this photo Hawaii Kai had already been around for 15 years, and upstart Jade Island had been around for five. Okay, okay, maybe your typical Manhattanite wouldn’t have counted Staten Island as really being part of New York. And I’ll grant it probably still had a lock on “most beautiful,” you can read all about it in the Critiki listing for Hawaii Kai.

In reality, even in 1962, Hawaii Kai wasn’t exactly “new.” That same prime Broadway location had been a Polynesian-themed destination going all the way back to early 1940s, first as Monty Proser’s Beachcomber, then briefly as Lanai, before becoming Hawaii Kai in 1962. Through the ’70s and ’80s, Hawaii Kai advertised heavily to tourists visiting to see Broadway shows, luring them in with promises of a dizzying array of souvenir mugs, salt and pepper shakers, even teapots, an avalanche of logo’ed baubles that live on in tiki collections around the globe. The tropical dream at this address finally ended when Hawaii Kai closed in or shortly after 1989. One of its final flashes of glory came when it was used as a filming location for the 1990 movie Goodfellas. 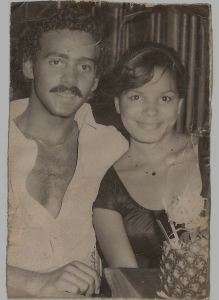 Here’s a special bonus: Critiki member Fela also added a souvenir photo taken at Hawaii Kai, this one from 1979. You can’t see as much of Hawaii Kai in this one, but you can see a tropical drink, served in a pineapple. Whew!

Mahalo to ronsteve and Fela for sharing this bit of Polynesian dining history!