These are the ten best tiki bars found in the world today, as rated by the best tiki experts around: the members of Critiki.

Critiki is a travel guide and historic archive of Polynesian Pop culture hotspots around the world, with information on over 850 tiki bars, restaurants, hotels and more. Critiki has over 7,500 members, tiki lovers who have shared their stories, mementos, pictures, and over 60,000 ratings of the places in Critiki, in an effort to guide their fellow tiki seekers to the good stuff.

This top ten list isn’t an editorial choice (my own list would look a bit different); this list is a reflection of the combined voices of Critiki’s tiki-experienced members, thanks to those thousands of ratings.

This year’s list has three new entrants, and it’s getting crowded at the top: last year’s top ten had scores ranging from 9.8 to 9.0, while this year the tenth best has a score of 9.3.

And now, here’s Critiki’s Ten Best Tiki Bars in the World for 2016: 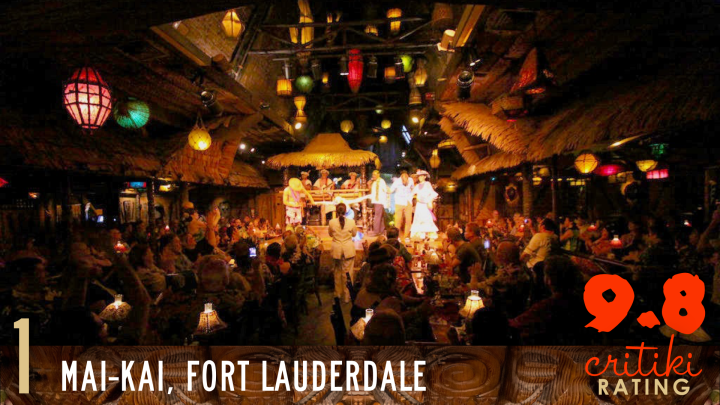 Any list of the best tiki places that isn’t topped by the Mai-Kai is to be ignored. There’s simply no matching the Mai-Kai, in either the grand scale, or the minute attention to detail in the decor. The Mai-Kai has multiple dining rooms, each themed for a different island group, a literal ship-shape bar, a gift shop, winding tropical gardens, musicians, dancers, and an array of Oceanic art and culture on display every way you turn. The rich history of the Mai-Kai, a family-run institution for 60 years (not counting the years more that much of the original staff spent at Don the Beachcomber in Chicago) means that no other venue provides such a transporting experience to the heyday of American Polynesian fine dining.

The tiki world sat up and took notice when Jeff “Beachbum” Berry announced he would at long last have a tiki bar of his very own—the revival of tropical drinks from the tiki bars of yore was only made possible through his years of extraordinary research efforts. Last year, Latitude 29 was too new and there weren’t enough ratings in Critiki, but this year the completely unsurprising verdict is in: Beachbum Berry’s Latitude 29 is beloved. The bar is nestled in the bottom of the Bienville House Hotel in the heart of New Orleans’ French Quarter, and the decor combines new carvings by tiki artisans Bosko and Tiki Diablo with vintage pieces from the Bum’s personal collection. 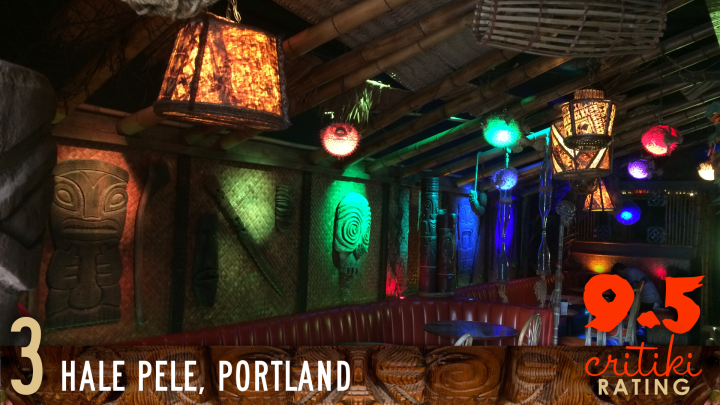 When Blair Reynolds bought the modern tiki bar Thatch and turned it into Hale Pele, he’d had the benefit of having spent more than a few evenings daydreaming about what he would do if the space could only be his. Once it was, he hit the ground running, and hasn’t let up. Each return visit to Hale Pele reveals some wonderful new improvement to the space, and Hale Pele is regularly atop lists of the best bars in Portland. The cocktails have been outstanding from Hale Pele’s day one. The first improvement Blair brought was to level up the drink menu, informed by his longtime passion for making drinks at home, and by his own successful line of tiki-skewed cocktail syrups, B.G. Reynolds. Rare for a smaller tiki bar: a food menu that while modest in scope, is outstanding in execution.

Foundation has earned rave reviews from locals and visitors alike, and in the last year it’s finally gaining deserved notice from the wider world. Its roots are unusual: it started as a punk bar, owner Don Nelson started to bring in some tiki elements, and then the metamorphosis was complete when he let his love for tiki take over thoroughly. Today, the fully-encrusted tiki haven serves up stellar drinks in a beautiful environment with enchanting music to match.

Forbidden Island was revolutionary when it opened. The common refrain had been that serving truly complex tiki drinks in a full-on environment wasn’t a viable business; the drinks were too complicated and too expensive, that people would balk at sitting in a bar where they couldn’t catch the football game and hear familiar, modern music. Forbidden Island didn’t just prove that a real, fully-formed tiki bar was possible, it proved that it was a path to huge success. Now the model has been emulated all over the world. Forbidden Island is still drawing a steady stream of people to the sleepy Mayberry-esque town in which it’s nestled.

When Martin Cate co-created Forbidden Island in Alameda, it was the first modern bar to demonstrate that high quality tropical cocktails could be viable as a business, and the path was to not cut any corners but rather to dive in with both feet. That captured the attention of tikiphiles worldwide and it was a big hit in the local bar scene, but it was Martin’s solo sophomore effort, Smuggler’s Cove, that brought that message to the world’s stage. Now one of the most famous and lauded bars in the world, Smuggler’s Cove is a marvel of tropical drink execution. It is packed any day of the week, but the master bartenders—themselves heralded as some of the best in the world—keep the rum, citrus and spice flowing quickly and make it look easy (it is not). The space is a love letter to the nautical history of rum first, and tiki second, but Martin’s knack for visual storytelling means that hardcore tikiphiles will feel right at home the moment they set foot in the door.

Tiki-Ti has some things in common with the Mai-Kai: it’s just five years younger, it also has a strong Don the Beachcomber pedigree, and it’s still family run… but that’s about where the similarities end. While the Mai-Kai is the grandest of tiki bars out there, Tiki-Ti may be the smallest. But that is its strength: spending an evening at Tiki-Ti feels like you’ve been invited to the most fun, informal, intimate house party in Hollywood. Tiki-Ti turns strangers into friends like no other place I’ve been, and when you’re a regular, you’re family. The decor looks more like your crazy uncle’s garage than an elegant showpiece, but it’s still got that transporting magic. The drink menu is daunting: dozens of nonsensically-named drinks, no pictures, no descriptions, but don’t worry… one of your half-dozen new friends will help you find a good one.

There are only a handful of “golden era” Trader Vic’s left around the world: locations that retain the dark, encrusted, high-density decoration style from the heyday of Polynesian restaurants. Lauded by many as the most beautiful of the remaining “golden era” Trader Vic’s locations, the Munich Trader Vic’s didn’t make the list last year merely because it hadn’t yet had enough ratings. This year, enough people have weighed in and confirmed the word: the Munich Trader Vic’s is a stunner. You’ll find it tucked into the lower level of the Hotel Bayerischer Hof, where it opened in 1972.

The Trader Vic’s in Atlanta is the last of the golden era Trader Vic’s in the United States. Found in the basement of the Atlanta Hilton, there’s no better place stateside to get a sense of what Trader Vic’s meant in the history of tiki. It’s slightly newer than the flagship location in Emeryville, California, having opened in 1976—but has escaped much of the remodeling that stripped Emeryville of much of its historic interest.

Pagan Idol opened earlier this year in San Francisco’s downtown Financial District, and right off the bat started wowing visitors with its beautiful-yet-traditional decor, unusual takes on tropical drinks, and fun crew. Its location means it’s full to the gills with an after-work crowd when it opens each day, but later in the night it tends to turn into an oasis of calm in the city.

Disagree with this list? Good news: the power to change it is in your hands. Rate your favorite locations on Critiki (and just as important: the places you’ve been that didn’t quite move you). While you’re at it, share your photos, and your own stories of trips to these places. If you’re already a Critiki member, you can look over the ratings you’ve made in the past, which is a great way to catch if you need to update your rating, or if there are places you’ve missed.

Some places that didn’t quite make the cut, either with a very close score, or because there haven’t been enough ratings yet: Frankie’s Tiki Room in Las Vegas, Trader Sam’s Grog Grotto in Orlando, Trader Sam’s Enchanted Tiki Bar in Anaheim, Don the Beachcomber in Huntington Beach, Lei Low in Houston, The Shameful Tiki Room in Vancouver, B.C., False Idol in San Diego, Tiki-Ko in Bakersfield, UnderTow in Phoenix.

See the previous Critiki’s Ten Best Tiki Bars in the World, from 2015.